Learn how to conduct phylogenetic informativeness analyses in R, Part 2

This is a three part tutorial. Part 1 focuses on the generation of PI profiles

Townsend et al. (2012) introduced theory that takes into the account the interplay of site rates, time, and internode length between species divergences to assess the predicted probabilty of data contributing to accurate topological resolution
Use of this method requires three inputs:
site rates, state space, and internode lengths
Site rates are covered above. Now we’ll introduce the internode lengths and state spaces and will continue using the avian tree and site rates from Prum et al. (2015) that are distributed with phyinformR.In case these are not in memory already use 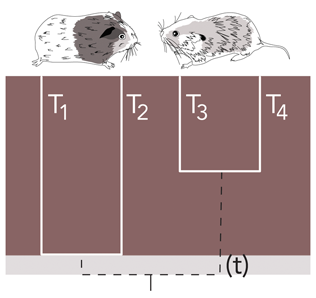 The theory of Townsend et al. defines T and t based on a phylogenetic quartet with even branch lengths. Under this assumption, T is the time from the present to the ancestor of a taxon (red in the example above) and t, the focal internode length (grey in the example above). Later in this section we will discuss how to perform similar analyses allowing for uneven quartets

Using the above illustration, you should have an idea of what T (time) and t (internode distance) you will want to use for your data.

For state space, a binary morphological matrix could be assessed by setting the state space to 2 or amino acid (20 or ~5)1, or other types of data with differing numbers of characters. If you are using nucleotides, despite having a four character states, Simmons et al. have demonstrated the state space to be better modelled using 3 states, so we will go with that for the remainder of this guide.
Here is the implementation using T= 100 million year (Ma) and t= 0.5 Ma

Alternatively you can use the Monte Carlo simulation approach1. Since the simulation is time consuming dependent on the number of simulations and the number of sites, we recommend that you do this on a cluster or while you are doing something else. The output is automatically recorded to file. The input looks similar to the approximation, though now you specify a file name for the probabilities and an image file name. Note that the two files must have different names!
You can also toggle the screen output on and off by setting image to either “TRUE” or “FALSE”. The simulation can be run in parallel so
Remember to set your cores appropriately using the registerDoParallel(cores=8)
Here is the function using the same T and t and 5000 simulations on a subset of sites to save time

Calculations based on the equations of Townsend et al.(2012) make several assumptions

1) equal base frequency distributions in the alignment

3) a Jukes-Cantor model of sequence evolution

Su et al. (2014) provided extensions to the equations of Townsend et al.(2012) that enable any nucleotide substitution model or distribution of base frequencies and Su and Townsend (2015) provided the theoretical framework for relaxing the assumption of even branch lengths
To use these extension, first specify your model settings based on a model selection program such as Modeltest, or Partitionfinder6. Model settings are defined as follows and require changing for different nucleotide substitution models, base frequencies, and branch lengths
For example:

internode in the above code is as an object containing the numerical values of branch lengths of T1, T2, T3, T4, and the internode length t0 for the four - taxon tree in question

Quartet trees do not need to be rooted. All four subtending branches may vary

Since branch length are rarely known with certainty, phyinformR can also be used to calculate QIRP, QIPP, and QIHP values across a distribution of trees such as those obtained from Bayesian analyses.
For this example, we will read in use the sample distribution of bichir trees from a study by Near et al. 2015 that is provided with the release

First you will need to specify the quartet of interest. In the bichir dataset, we will look at the clade containing Polypterus congicus as this species was not placed with high support in the tree:

We define the quartet as follows

The remaining objects should be familiar, please review the above and preceeding page if the variable names seem enigmatic. To compute over a distribution of trees, run the function. Note that here we are truncating the tree distribution for the purpose of example